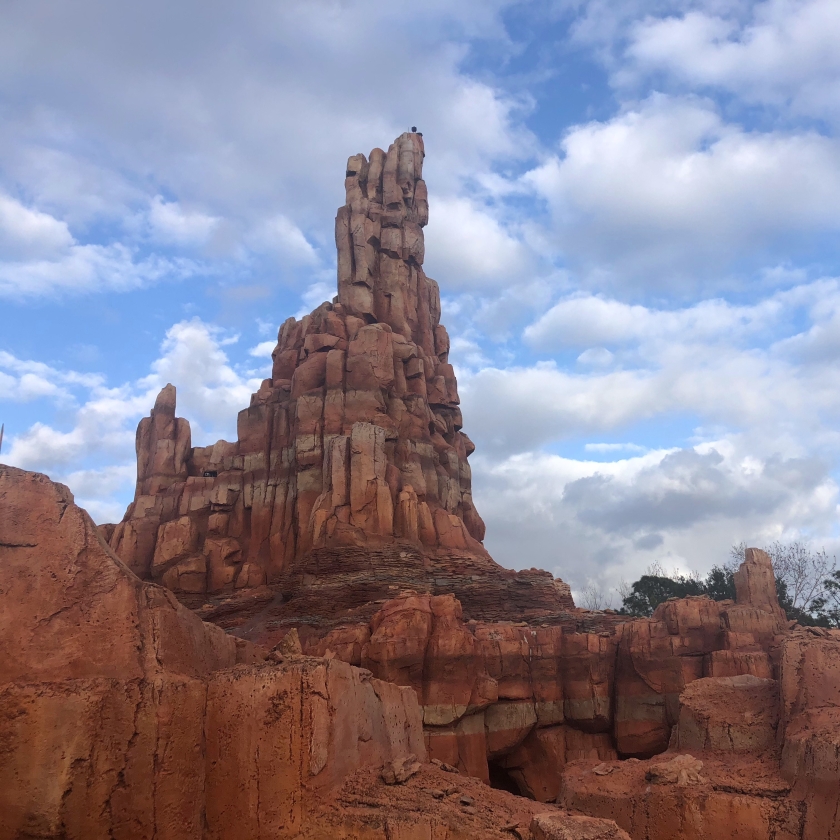 In the wake of the announcement that Splash Mountain at Disneyland and Walt Disney World will be re-themed to the animated film ‘The Princess and the Frog’, a lot of people have been curious about how Disney will make the newly themed ride fit within their current lands. For Disneyland it’s pretty easy to comprehend, since Splash Mountain is situated next to New Orleans Square and ‘The Princess and the Frog’ takes place in New Orleans. Walt Disney World’s Splash Mountain is a bit trickier though. The ride is situated in Frontierland, which is themed to the American Frontier of the 19th century. New Orleans isn’t really a part of this, so a lot of people are concerned that Disney doesn’t have a solution to this issue of theming.

Now the easy answer to this is that Splash Mountain is situated between the Caribbean section of Adventureland and the American Southwest of Frontierland. New Orleans sits right between these, so with a little exterior re-theming to the surrounding buildings they could easily make a new mini-land similar to New Orleans Square at Disneyland.

But what if that wasn’t enough? What if Disney wanted to turn the entirety of Frontierland into an East-Coast New Orleans Square? I had an idea for an article about re-imagining the different lands of the Disney parks, and now seems like a great time to do that. I’m going to take a look at the different parts of Frontierland and see what we can do to rework them into a New Orleans Square for the Magic Kingdom. Keep in mind that nothing is sacred, so your favorite attraction might get changed. Don’t worry, it’s all part of the fun.

Big Thunder Mountain sits at the northern most part of Frontierland, so I figured it would be good to start here and work our way downwards. This is also probably going to be the most challenging, as Big Thunder feels like the most “western” thing in all of Frontierland. I also don’t want to make this another ‘Princess and the Frog’ re-theme, since I don’t want the whole land to be entirely based on that movie. Finally, I don’t want this article to just be “tear down the ride and replace it with something completely different”, so we’re sticking with some sort of mine-train roller coaster. That said, I think any and all of the theming and rock-work can be changed. All that has to stay is the coaster itself.

I would like to re-theme Big Thunder Mountain into The Runaway Streetcar Extravaganza. If you didn’t know, one thing New Orleans is known for is having the oldest operating streetcar transit system in America. I feel that an original ride based on this could be extremely innovative while still keeping the same thrill level as Big Thunder Mountain. They could replace the mountainous rock-work with buildings from the French Quarter and make it so that the coaster seems like it’s traveling along the street (and even potentially smashing through buildings, if this was a runaway streetcar). The ride vehicles would resemble the street cars themselves, and would maybe even have an electric cable above the track. I don’t really have much an idea for what the actual storyline of the ride would be, so feel free to get creative and come up with your own!

Tom Sawyer’s Island would become a Louisiana Bayou, perhaps the one from Princess and the Frog. I don’t want there to be overexposure for that movie in this new land, since I tend to prefer original storylines to things based on movies, but I understand why it fits perfectly here. If it was based on Princess and the Frog, then you could have all sorts of interaction with characters from the movie. You could find Louie playing his trumpet, Ray and his other firefly friends, and Mama Odie in her house.

More importantly, I would like the island itself to be a story-driven walkthrough. Sure, it would have familiar characters, but it would also feature a new storyline with loads of interactivity with original characters and the island itself. I think they could almost turn it into like a longer interactive experience where you feel like you are actually part of the story, similar to the first half of Rise of the Resistance. Sure, that might take out the exploration aspect of Tom Sawyer’s, but turning it into a show that you are a part of is better in my eyes.

Yeah, I know this is part of Liberty Square, but I wanted to lump it in here because of the important presence that riverboats have in New Orleans and Louisiana itself. This is going to be the only exception to my rule of not building anything completely new, as I would like to build a second dock in between Big Thunder and the Tom Sawyer rafts where guests can board the boat for a cruise along the Mississippi River. There would be live music and drinks aboard for guests to enjoy, and they could even do a daily Mardi Gras show from aboard the boat. I think leaving in the Liberty Square station would be fine, but if it caused too much congestion then maybe it would be best to take it out.

This one is easy. All that has to be done is overhauling the station to make it look more like the New Orleans Square station in Disneyland.

I originally wasn’t going to talk about this, since the main reason I’m turning Frontierland into New Orleans Square is because of the Princess and the Frog overhaul coming to Splash Mountain in the near future, but I figured I’d at least touch on the thing I want most in the ride: an original story. They should definitely have different elements and songs from the movie, but I think rehashing the whole movie would make for an outright boring ride. Think of how Frozen Ever After had an original story of celebrating the Official Summer Snow Day (the anniversary of when Anna saved Elsa in the first movie). That story is the perfect blend of new and old ideas, and I hope they keep that in mind when designing the Princess and the Frog ride.

Briar Patch is a small gift shop near the entrance of Splash Mountain. I think it would be good for this to become a designated place Princess and the Frog merchandise. I just hope they don’t give it a generic name like “Princess and the Frog: The Store” or something (not that I think they would).

I see a lot of people online talking about how they want this to become Tiana’s Place. I actually think Tiana’s Place would be a better fit somewhere else, and we’ll get to that in a minute. Since Pecos Bill is a quick service, I think re-theming it to Duke’s Cafe (the cafe Tiana works at in the beginning of the movie) would fit a lot better here. I know I said I didn’t want to oversaturate the land with Princess and the Frog stuff, and two restaurants based off the movie might sound like it is, but I really think they could get away with having no references to the movie in Duke’s Cafe. It would be more along the lines of a classic New Orleans cafe, with the name being the only nod to the movie. Well, that and the delicious beignets they would serve.

Golden Oak Outpost is a small food stand on the border of Adventureland and Frontierland. There’s not too much to change here, so I think changing the name to something like Golden Trumpet Outpost would bee a creative nod towards the original. It could serve various Cajun foods.

Westward Ho is another food stand in Frontierland. Since I like references to previous things in Disney, the new name would be Southeastern Ho. Adding some speciality drinks found in New Orleans would make this stand fit in with the new area.

This small store offers your usual Disney sweets and snacks. I think they could keep selling the same stuff under a different name like Mississippi River Supply. Maybe they could add some popular Louisiana sweets to the mix as well!

This was the one I was arguably most excited to re-imagine. Country Bear Jamboree is a fun, albeit dated and creepy attraction that could use an update. However, I still want to keep the idea of bears playing instruments. What if the famous Country Bears had grown tired of performing the same country songs and decided head towards Louisiana to pursue a new audience in a new genre…jazz. The band renames itself to The Bears of Jazz, and the attraction is now known as The Quarter Venue Presents: The Bears of Jazz. With the help of some new animal friends from the area (perhaps even Louie from Princess and the Frog), the bears put on a new show that breaths fresh air into a cute but dated idea.

Frontier Trading Post is my favorite store in Walt Disney World, because it’s one of the best places to buy and trade pins! I still want the store to centralize around pin trading, but now in the setting of New Orleans. Call it Orleans Trading Co., or something more creative, and that should be good.

This one’s tough, because I can’t just rip it out and put something completely different in its place. That said, I don’t think a shooting range is the most fitting thing in New Orleans Square, even if it is admittedly pretty fun. My solution would be to take out the laser guns and set pieces and replace them with a screen and a line of guns that resemble the guns from Toy Story Midway Mania. Guests would insert a quarter to play on their section of the screen, where they would shoot different objects at Mardi Gras targets like balloons and other decorations to get a high score. I would name this Mardi Gras Mayhem.

Remember when I said we’d get to Tiana’s Place? Well here we are. The Diamond Horseshoe is a sit-down restaurant, making it the perfect location for a restaurant themed to the one Tiana dreams of creating (and eventually does) in the movie. The building will be a near exact replica, inside and out, and will feature dishes such as gumbo, jambalaya, and minced vegetables. There will also be the glorious crystal chandelier and a bandstand with a pianist and other live jazz musicians. Many people have been requesting this restaurant for a while, myself included, and I hope they decide to put it here.

Those are my ideas for Re-Imagining Frontierland! Obviously, not every idea is entirely realistic, but that’s all part of the fun. If you liked these ideas, be sure to leave a like and let me know down in the comments. If you have your own ideas on how to Re-Imagine Frontierland, be sure to leave a comment down below discussing what you would change!

Next I will be Re-Imagining Tomorrowland. Stay tuned!