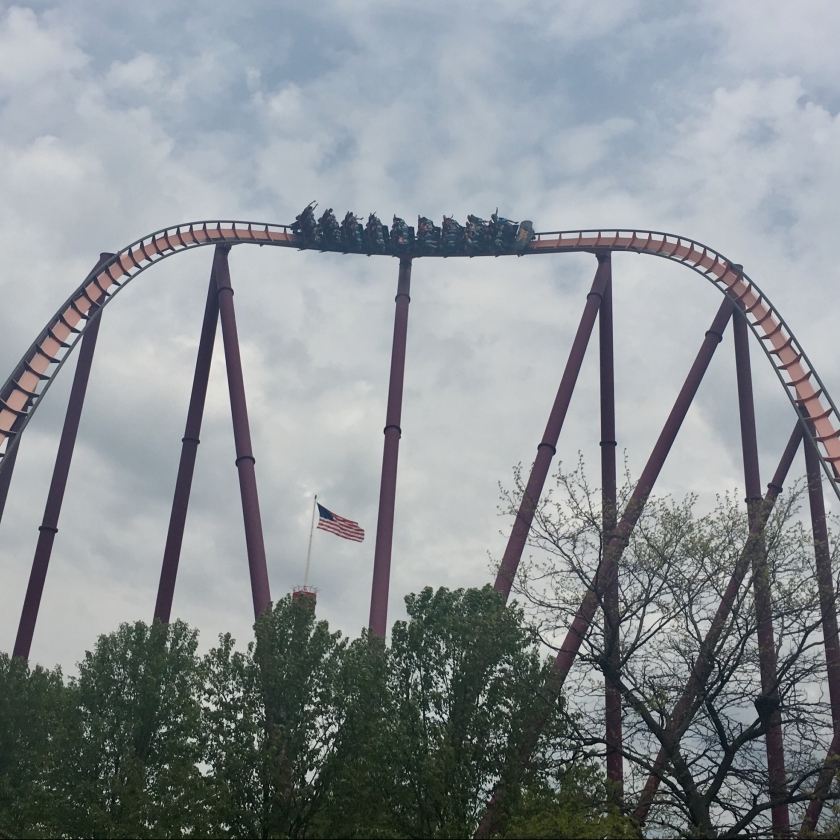 Six Flags Great America is my home park, and it’s home to a lot of roller coasters. Towering above them all at 202 feet is Raging Bull, the tallest coaster in the park. Built by B&M in 1999, it is the second hyper coaster the company ever built. It is also the first (and only) B&M hyper coaster to feature the “twister” layout, which focuses more on sharp, sudden turns rather than airtime. Since it’s the only one ever made, does that mean it’s…not good? Read on to find out!

I think it’s safe to say that Raging Bull starts off pretty good. After exiting the station, the ride banks left and heads up the lift hill. Once you arrive to the top, the car dips down a “false drop”, which is a fun little precursor to the 208 foot drop that comes next. How can the drop be taller than the height of the ride? Well, Raging Bull has a pretty sweet underground tunnel that extends the length of the drop and gives the ride a bit more personality. You can sit anywhere on the ride and get some enjoyment out of it, but I’d definitely suggest getting a back row seat for the extra airtime.

Okay, when I say “extra” airtime, I really mean “any” airtime. Due to Raging Bull having the twister layout that focuses on turns, there’s barely any airtime to be found. Sitting in the back does give you some pretty phenomenal airtime during the drop, but there’s not many other points on the ride where you get anything more than a small pop out of your seat. This might not be a problem for some, but personally I prefer my hyper coasters with a large helping of airtime.

Instead of a large hill following the drop like most hypers, Raging Bull continues with a large over-banked turn. This part is alright, but it’s pretty forceless and could have been better. After that there’s an actual hill, but…it has trim brakes that take away any possible airtime. This is literally the only large, “normal” hill on the ride, so it’s easily the most disappointing part. The coaster then heads over a slightly banked hill (again, no airtime), a smaller over-banked turn, and then hits the mid course. Overall, the first half of the ride is very lackluster.

An Above Average Second Half

Luckily, the first half of Raging Bull doesn’t give the coaster a death sentence. After the mid-course, the ride dips down into 2 smaller hills that give better airtime than the actual drop. It’s kind of pathetic that the best airtime in the entire ride is on the smallest hills possible, but I guess it’s better than nothing. After the 2 hills, Raging Bull begins to fly through a number of tight, somewhat intense turns before entering the final brake-run. It isn’t the most mind-blowing ending to a coaster in the world, but it definitely picks up enough to end on a positive note.

Raging Bull might be Six Flags Great America’s largest roller coaster, but it’s definitely not the best. I’d place Goliath over it any day, and probably X-Flight as well (and hopefully Maxx Force). There’s definitely some fun to be had while riding, especially during the first drop and second half, but the lack of airtime, intensity and interesting elements keep Raging Bull far from greatness. It’s definitely a unique coaster credit to get and a “Must-Do” at Great America, but don’t go into it expecting anything more than a lower-tier B&M hyper.

Want to stay up to date with our latest theme park plans, reviews, and more? Be sure to follow us on Twitter @limitless_park and Instagram @Limitless_Park!