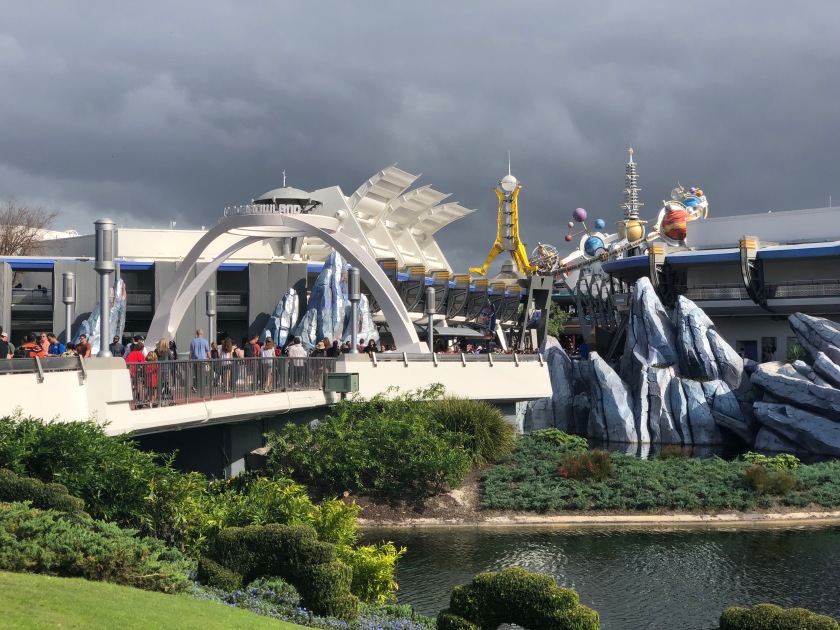 In case you missed it, the latest series of articles I’m writing centers around taking the current lands in the Magic Kingdom and “re-imagining” them into either a new version of that land or a completely different land altogether. For the inaugural article I wrote about what I would do to change Frontierland into a version of Disneyland’s New Orleans Square. Today I am going to see what I can do to change present-day Tomorrowland into Discoveryland. For those who don’t know, Discoveryland is essentially Disneyland Paris’s version of Tomorrowland. That land takes a lot of inspiration from the steampunk-like stories of Jules Verne. While I absolutely love that atmosphere, I think I will just be taking the “Discoveryland” name rather than the steampunk theme. This is because I will be incorporating Tron: Lightcycle Power Run into this newly themed land, rather than changing the theme of that ride itself. Tron isn’t steampunk at all, so it wouldn’t make sense to have a steampunk land with a sleek, futuristic building like the one that houses Tron.

Without further ado, let’s get started.

Going from top to bottom on the Magic Kingdom map, the first attraction we have to redo is Tomorrowland Speedway. A rule I established in the previous article was that I had to overhaul the current attraction, but I can’t just rip it out and replace it with something completely new. So while the Speedway would be a great thing to get rid of completely and replace it with two to three new things to do, we have to keep it as is.

Therefor, I want to overhaul this attraction into Cars: Discoveryland Speedway. I know, the Cars movies aren’t futuristic by any means, but nor is the current Speedway. I think redoing the atmosphere of the Speedway to feel more like a racing stadium. Each car would be remade to look like the Cars from the movies, with Lightning, Chick Hicks, King, and others appearing. Again, this isn’t my favorite idea, but it would at least make the current attraction feel more relevant.

I don’t really want to change this restaurant, but since I have to I think they should give Cosmic Ray’s the signature restaurant treatment. There are already a bunch of other quick-service options in Tomorrowland with similar menu items, so turning it into a sit-down dining experience would be awesome for Tomorrowland. It would keep a similar “space cafe” theme while making it less cheesy. Of course, I would keep Ray, but instead of DJ-ing I think I would have him playing a futuristic-looking piano. The final name would be Ray’s Cosmic Bistro.

Star Trader’s is a small shop in the same building as Cosmic Ray’s. Since it’s basically right across from the Speedway, I think turning it into a Cars and Planes gift shop would be nice. I would love it if the shop would sell exclusive, never before seen space vehicles like rockets and UFO’s that look like they’re from the Cars universe.

Space Mountain is in dire need of an upgrade. While I would keep the building and general idea of the attraction, I would re-make it to be as similar to Disneyland Paris’s version of Space Mountain as possible. That version is a much more extreme coaster, and with Tron opening up as another family coaster right next door, I think offering a more extreme option makes sense. Instead of remodeling the exterior of the attraction, I would like to make use of Disney’s projection mapping technology to make it look like a giant space station. It would show various ships landing and departing, and maybe even asteroids hitting the station. I would rename this ride Space Mountain: Mission 75 (after the year the original Space Mountain opened.

Since this gift shop is connected to Space Mountain and serves as the exit, let’s turn it into the Starport 75 Ground Level Docking Bay. It can still sell the same merchandise, but I think fitting it in with the idea of a full sized space station would make more sense.

Cool Ship is a small food stand that looks like, well…a cool ship. It sells churros, so why not play into that more? Let’s call it the Galactic Churro Foundation. The backstory will be the stand receives churros from all over the galaxy, and there is a new selection of like three churros every day. Is this slightly impractical? Yes. Is it fun? Yes.

Even though this is just a tiny stand that sells pins, it definitely has one of the coolest gift shop names out there. Instead, of changing the name, let’s change the merchandise. Since Ursa Major is a bear, let’s have this store sell Duffy the Bear stuffed animals. They’ll wear space suits and people will love it because well…he’s Duffy.

I swear Tomorrowland has the best names for their stores/restaurants. Anyways, this is another counter service food stand that specializes in milk shakes. I think this would be the perfect place to give a subtle nod to Galaxy’s Edge in Hollywood Studios. While I don’t want any Star Wars related things to stand out in this new Discoveryland, I do think it would be cool to have this restaurant serve as a secondary option to get delicacies that you could normally only find in Galaxy’s Edge. It wouldn’t have everything, since that would ruin some of the exclusivity, but you would be able to find things like Blue and Green milk or a Mustafarian Roll. As much as I love the current name, I would change it to Discoveryland/Batuu Imports and Exports.

Since we no longer have Ursa Major as a designated place to buy pins, let’s turn Merchant of Venus into the Discoveryland Badge Center. In addition to being able to buy loads of pins, I would like to have the first ever pin customization station in this store. You would go to a kiosk and select a pin design, do whatever color and text changes you want to it, and then have created within the next few hours. If you can’t be in the parks when it’s available for pick-up, then you can have it shipped back to your hotel or back home.

Astro Orbiter is an Aerial Carousel ride that gives some pretty great views of Tomorrowland. However, it doesn’t really feel like you’re actually flying a rocket. If they switched out the ride vehicles to look less like rockets and more like hovercrafts, it would fit the part a bit better. The ride’s new name would be Hovercraft Heights.

I’ve been waiting a while for this one. The TTA is my favorite attraction in the Magic Kingdom, yet I couldn’t wait to change it. The ride would still act as a tour of Discoveryland, but it would be updated to feel much more like a complete experience. Firstly, the ride would now be guided by what looks like a hologram of a tour guide (It would use the mirror trick that is used for Rey in Rise of the Resistance, but on a much smaller scale). The hologram would be on the front of each car, but does not appear right away. Instead, once you get into the first tunnel, the automated voice that previously narrated the ride calls out “paging Mr. Morrow, Mr. Tom Morrow.”, and Mr. Morrow appears as the holographic tour guide. He accompanies you on your journey as you tour around Discoveryland, and he constantly makes slightly annoying yet humorous remarks about how “back in his day” things used to be different. This would allow the ride to become a “moving museum” that discusses both present day attractions while also talking about what was located in Tomorrowland before it became Discoveryland.

I could go on and on about other changes I would make to this, but I’ll save that for another time. Finally, the name for the attraction would be simplified to Discoveryland Tours.

Tomorrowland really has a lot of cleverly-named places to get generic theme park food, doesn’t it? The Lunching Pad serves your usual burgers and other American food options. What I would like to do is have the restaurant offer a more International Cuisine. Let’s call it International Harvest, and choose different food options from major players in the Space Race. A few selections each from American, Russian, and Chinese cuisine should do the trick.

Stitch is technically already closed for good, but let’s do something with the attraction anyways. I want to add something Marvel into Discoveryland, but I don’t want it to scream Marvel. My idea for this would be called S.H.I.E.L.D. Chitauri Encounter. Remember the Chitauri from the first Avengers? Turns out that the S.H.I.E.L.D. organization has transferred one to a new holding cell in Discoveryland. Similarly to the attractions that came before this one, the Chitauri escapes its cell and decides to wreak havoc on the audience. It kills some agents, but Nick Fury arrives and puts an end to the alien’s chaos. There will be little to no mention of the Avengers or other Marvel heroes in order to avoid a potential issue with Universal owning the theme park rights to the characters.

I’ve never experienced Monster’s Inc. Laugh Floor before, or at least I don’t remember it. While a comedy club attraction sounds interesting, I don’t really think it has a place here in Discoveryland. Instead, I think it would be cool to make this an Inside Out attraction titled Inside Out: Your Story! where you are the emotion in control of a human. You and 4 others take the rolls of Joy, Sadness, Anger, Fear, and Disgust and get to do an interactive, visual “choose your own adventure” that has different endings depending on what you and your group chooses on the control panel.

Buzz is a pretty fun shooter-style dark ride, but it doesn’t really have a reason to exist with Toy Story Midway Mania being available at Hollywood Studios. Instead of Toy Story, let’s change the theme to Big Hero 6. It would be called Big Hero 6: Baymax Blast, and the ride vehicles would make it so you think you are riding on Baymax. It would have an original storyline with an original villain, but the ride would still be focused on shooting targets and obtaining a high score. The ride’s technology would be updated to include better, more accurate laser guns and a ton of projection mapping.

I hold the firm belief that, at the Disney Parks, no ride or attraction is sacred. However, if you were to twist my arm and get me to pick one attraction that I think should never be torn down, it would be this one. Carousel of Progress is an extremely important piece of history for the Walt Disney company. That said, it’s outdated as all hell. I think updating the attraction to include all new scenes and technology that display just how far we’ve come in the world (and how much more room there is for improvement) would be perfect. Since there would be an equal focus on our past and future, I would opt for a name change to Walt Disney’s Carousel of Discovery.

Those are my ideas for Re-Imagining Tomorrowland! Obviously, not every idea is entirely realistic, but that’s all part of the fun. If you liked these ideas, be sure to leave a like and let me know down in the comments. If you have your own ideas on how to Re-Imagine Frontierland, be sure to leave a comment down below discussing what you would change!

Next I will be Re-Imagining Liberty Square. Stay tuned!