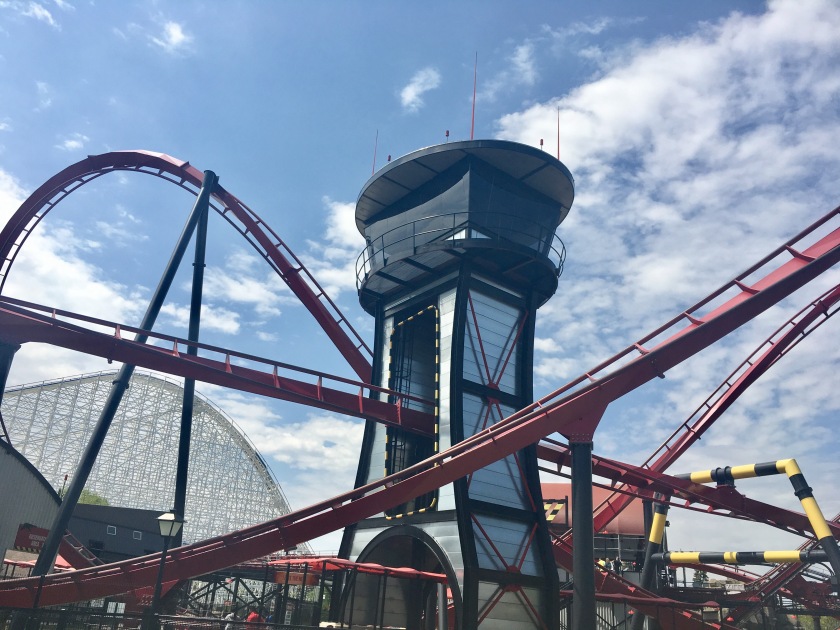 Over the course of 2017, I’ve paid visits to Six Flags Magic Mountain, Carowinds, and many other parks across the U.S. However, today we’re heading back to my home park, Six Flags Great America, to create a new, revitalized Top 10 coasters list for the park. Unlike my previous Great America Top 10, this brand new list includes the New For 2017 The Joker: 4D Free Fly Coaster, as well as changed or updated opinions on the various roller coasters located at Six Flags Great America.

I’m not the biggest fan of flying coasters, and Superman: UF happens to be just that. I’ve ranted about hating the Pretzel Loop element’s overwhelming intensity on both this and Tatsu at Magic Mountain before, so I won’t do too much of that here. At this point, Superman has also become a bit bland due to riding other Flying coasters such as Tatsu and Batwing (and Nighthawk, but we don’t talk about that horrible contraption). It’s not that Superman: Ultimate Flight is a bad ride, it’s just not a very good ride either. 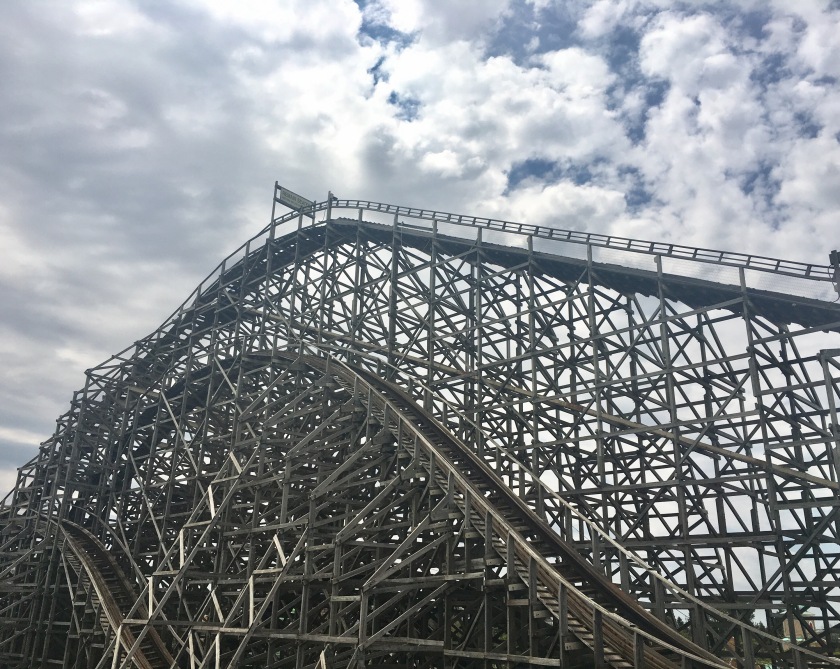 Viper fell two spots since my last Great America Top 10, and that’s primarily because it just doesn’t deliver the same fun, wild ride it did a year ago. It’s sluggish if you ride in the front, and far too rough if you ride in the back. I really don’t want to dislike Viper, as I’ve ridden far worse before, but it definitely isn’t as enjoyable as it used to be.

The Dark Knight Coaster is by far my favorite Wild Mouse coaster I’ve ridden. It’s pretty smooth, has an outstanding amount of theming for a Six Flags park, and literally takes place in the dark! You have no idea where you are going to turn next, until it’s right in front of you. Dark Knight might not be the most thrilling coaster in the park, but for a wild mouse, it’s definitely the best I’ve ever seen. 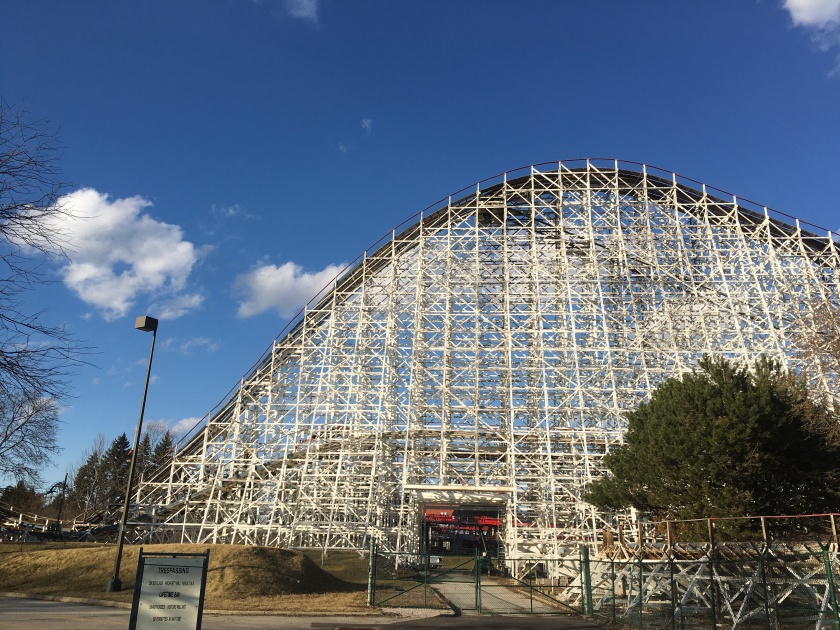 A coaster that’s dropped 3 whole spots since my last Top 10 is American Eagle. Now Eagle isn’t a bad ride, and is not nearly as rough as some people say. Instead, the rides downfall is simple: I’ve just ridden better wooden coasters by now. American Eagle simply can’t compete with the thrills delivered on something like Ghost Rider at Knott’s Berry Farm. It’s still a great dueling woodie, but there’s better coasters out there, especially at a park like Six Flags Great America.

Yes, Batman: The Ride may be a clone, but it still delivers an extremely intense ride. I originally thought the back row was the best seat on this coaster, but my opinion changed since I rode it in the front row. The view from the front is incredible, and makes you feel like you’re truly riding right below the track. I think I preferred the Batman clone at Magic Mountain a little bit more, but it’s still an awesome coaster.

I’ve said it before, I’ll say it again: I’m kind of a sucker for launch coasters. Sure, V2 isn’t a complete circuit, but it still delivers a very forceful launch, as most Intamin launch coasters do. Also, the hang-time you get at the top of each spike is fantastic, especially the second time you go backwards. I definitely recommend a back row seat on this ride for that moment of floater air alone.

I did not expect the park’s new for 2017 coaster, The Joker, to be nearly as good as it was. I’m not necessarily the biggest fan of rides that flip you around like Joker does, but I was actually very impressed with the 4D Free-Spin model that S&S created. No two rides on the coaster are alike, making it very reridable. I’ve also found the different seats to give unique rides, and definitely prefer facing forward on the Purple Track side. Although I don’t necessarily think we needed this coaster this year, it is nice to have it as a part of our lineup. 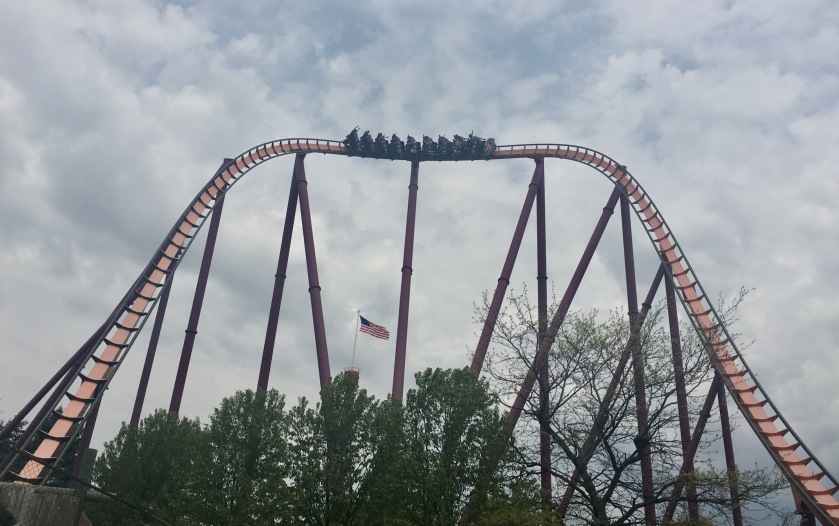 Raging Bull is a great coaster when it comes to Great America’s lineup, but a only a decent ride when compared to other hyper coasters. Being the tallest ride in the park, it does offer some thrilling twists and turns, as well as a long ride time. However, this ride is bogged down by having little airtime or intensity. The “Hyper Twister” layout focuses more on banked turns than giant hills, making it not as forceful or thrilling as other hyper coasters, in my opinion. It’s still one of the better coasters at the park though, and its high capacity allows for lots of re-rides.

My original number one at Great America, X-Flight, still holds a solid spot at number two. The unique wing ride experience this coaster gives is perhaps the biggest reason for it placing so high on this list. Until Joker debuted this year, X-Flight was the only wing coaster in the park, and is still one of the few B&M wing coasters in the U.S. It’s not be extremely intense, but makes up for it by adding thrilling, graceful maneuvers that are nothing like any other ride in the park. The final inversion, an inline twist/near miss element, is still one of my favorite inversions to date. If you come to Great America, X-Flight is a must do attraction, especially if you’ve never ridden a wing coaster before.

My number one coaster at Six Flags Great America is Goliath, a coaster by Rocky Mountain Construction. This actually only made number 3 on my previous list, due to me only having ridden it once at the time. I’ve gotten plenty more rides on it now, and although it might not be as memorable as the other RMC’s I’ve ridden, it is still a very strong ride. Sure, the duration is quite short, but every single element from beginning to end packs a punch, from it’s 90 degree drop to it’s crazy Zero-G Stall inversion. Even the coaster’s single airtime hill is better than half of the airtime hills on other coasters I’ve ridden. To me, Goliath deserves to be the “king” of Great America’s lineup, and it’ll probably be that way for a very long time.

Want to stay up to date with our latest theme park plans, trip reports, reviews, and more? Be sure to follow us on here, Twitter @ack1918 and @limitless_park, and Instagram @ack1918 and @Limitless_Park!

In addition to Cinderella Castle’s new look, Disney also released concept art for the others three WDW park icons’ 50th anniversary overlays. The Hollywood Tower Hotel, Tree of Life and Spaceship Earth will all be reimagined during the celebration!
Disney has shared a look at the new Cinderella Castle overlay for the 50th anniversary at Walt Disney World. Adding to its makeover from last year, the castle will receive gold bunting and a 50th anniversary crest in the front. The 50th anniversary celebration, named “The World’s Most Magical Celebration,” will begin Oct. 1!
Knott’s Berry Farm has shared their first look into Knott’s Bear-y Tales: Return to the Fair. The shooter-style dark ride will debut sometime in 2021!
Hong Kong Disneyland will officially re-open on February 19. The park has suffered multiple extended closures over the course of the pandemic. This will be its third time reopening.